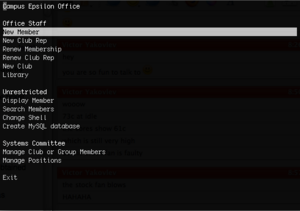 ceo is the CSC member creation and administration interface. It was originally written in perl by persons of mysterious-ness, and was re-written in python by Michael Spang in early 2007. The source-code for ceo can be found in git: csclub:/users/git/public/pyceo.git.

ceo can be accessed by running the "ceo" command from a terminal, or terminal emulator. By default, a curses-based menu interface is presented. Use the arrow keys to navigate; on many screens, pressing a letter will select the next menu item beginning with that letter.

Run ceo --help to see a list of command-line utilities.

After a new member has paid the membership fee and signed the Machine Usage Policy forms, a new member account is added to the CSC system by selecting "New Member" in ceo and following the on-screen instructions. The new member's username is to be identical to their WatIAM username, if applicable. For WatIAM users, the name and program fields will automatically be filled after a username is provided.

A membership can be renewed or extended by selecting "Renew Membership" in the ceo interface.

Clubs are hosted free of charge. To create a new club account use the "New Club" option in the ceo interface.

For access to features beyond basic hosting (ie, databases), one of the club representatives will need to email the Systems Committee to have this set up.

In order to sign the ceo packages you will need to generate yourself a GPG key if you do not already have one. Assuming you do not run

Choose option (2) DSA (sign only). Choose no expiration when prompted and then your full name and email when asked. It will ask you to confirm the information and then for a passphrase.

Add Your Key To Mirror

Now in another terminal run

Then paste the output from gpg --export --armor $KEYID and end with CTRL-D. It should give you a confirmation, example

The source-code for ceo can be found in git: csclub:/users/git/public/pyceo.git. To checkout the code run

When you are done making your change you need to update the changelog with dch. Assuming this is a minor incremental change run

Add a description of your change and then save and quit. Once you are sure of your changes commit them to the git repository and push them (test them first!). To build the package run debuild

This will generate the *.deb files in the parent directory.

In the directory containing the *.deb and *.changes files run

Then ssh to mirror and run

The package should now be uploaded and you can update in the usual way with apt-get/aptitude.